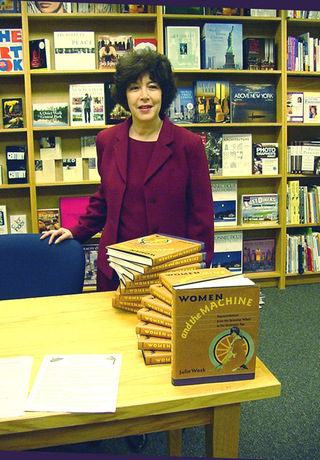 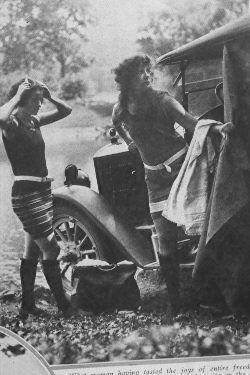 AMERICAN FLAPPERS ENJOY THE FREEDOMS OF THEIR NEW AUTOMOBILE

Women and the Machine: Representations From the Spinning Wheel to the Electronic Age

I Framing Images of Women and Machines
II Wired For Fashion: Images of Bustles,Corsets, and
Crinolines in the Mechanical Age
III The Electric Eve
IV Women and the Bicycle
V Women and the Automobile
VI Women and Aviation
VII Women in Wartime: From Rosie the Riveter to Rosie
the housewife
CODA The Electronic Eve and Late-Twentieth-
Century Art

CHAPTER FOUR: Women riding bicycles experience a new sense of freedom and mobility even as satirists fret that they'll ride off, leaving leave their husbands and families behind.

CHAPTER FIVE: From the 1890s onward, women automobilists welcome these new vehicles of change even as satirists lampoon the wayward woman driver. Females and their automobiles become emblems of the modern woman, even as advertisers feature women as beautiful models in automobile advertising.

CHAPTER SEVEN: Women war workers in World War I and II transform their identities as they demonstrate their expertise. Images by artists, photographers, writers, and advertisers portray female automobile and airplane mechanics, welders, riveters, machinists, railway workers. These images reveal women's struggle to maintain a sense of femininity amidst the machines, and make the transition from Rosie the Riveter to Rosie the housewife in the postwar world.